I am 47 years old.  My 50th birthday will mark ten years of working seriously on my writing the way a professional should.  I have come a long way since my late 30s.  But as 50 looms, it seems to demand a big, landmark-type oath of some sort. 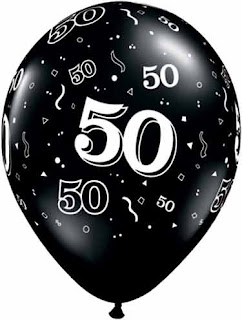 I am always leery of goals I cannot control.  I cannot force an agent to sign me or a publisher to buy my book.  However, if I am honest with myself, I know that's what I want.  I don't want to reach my 50th birthday still struggling and querying and hoping and clinging to the barest scraps of encouragement.  Not after ten years.  Not as I round the half-century mark of my life.  I want to stand before the world and say, "My goal is to have an agent or a book deal or both by the time I'm 50."  Such a statement terrifies me, fraught as it is with the potential for failure, riddled as it is with elements beyond my control.

I'm doing what I'm supposed to do to get there. Writing regularly.  Participating in a  critique group.  Attending conferences.  Building my digital platform.  Submitting my work.  But as 50 looms, I feel I should redouble my efforts somehow.

I have one finished novel and a bunch of short stories.  I've even sold some of those shorts.  I have a second novel that is finished but needing revision, which I'm working on diligently.  I have a third novel that has resisted the completion of a decent draft but keeps pulling at me.  And the rest of my life, my teaching job, my family, my other interests, they pull at me, too.

I really only have two and half years to go until I turn 50.  30 months.  30 months to, as my critique group puts it, "query the hell out of" my first novel, and finish revising the second one, and finish the third one.  But mostly, query the hell out of the first one, because without the queries and the pitches, that elusive agent/book deal will never, ever, ever happen.  Which would leave me with self-publishing, a possibility I have considered and rejected more times than I can count, and know I will revisit again before I hit that half-century milestone.

And then what?  If I haven't reached those goals by the time I reach the big 5-0, what then?  I don't imagine I will quit writing.  I can't help myself.  But I can't imagine just plodding on and on the same way, Sisyphus rolling the boulder up the hill over and over again indefinitely.

Ah, soul-searching.  The older you get, the more loaded it gets.
Posted by Cynthia J. McGean at 10:47 AM

Email ThisBlogThis!Share to TwitterShare to FacebookShare to Pinterest
Labels: finding an agent, giving up on dreams, giving up on goals, turning 50, writing goals, writing milestones