Querying Makes Me Want To Throw Up 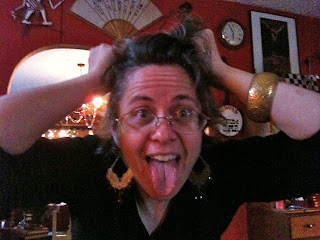 Well, ladies and gentlemen, it's once again time for me to suck it up and face the task of querying something.  This has to be among my least favorite writer activities ever.  Query letters involve this incredibly frustrating dance between capturing the essence and voice of your work and somehow distilling it, and yourself, down to one page of professional-sounding text that will grab the interest of an agent or a publisher enough to bother reading the first page, which must then deliver as promised and more.  The query is the champion you send in to battle for a protagonist whose story has become so near and dear to you that the character is real, part of your family.  It is the first hurdle towards ANYTHING.

Lucky for me, I have this critique group that is beautifully pushy/encouraging about getting me to query.  "Query the hell out of it" were their exact words.  And I am throwing out the one-at-a-time mentality in favor of sending off multiple queries to appropriate recipients who have expressed an interest in something like this novel.

Sounds like I have a pretty good attitude, right?  Wrong.  Querying makes me want to throw up, or to throw my computer across the room, I'm not sure which.  It's so hard to find the right balance between professional voice and writer's voice.  I want the damn thing to be perfect, but perfectionism has historically been the enemy of forward progress for me, and so it is with querying.  Just pull the trigger, McGean!

I have no sage advice to offer here.  I can offer only commiseration with those other poor souls out there who are gearing up for this special battle of the writer's world.  That and this encouragement:  Those folks in my critique group who said "Query the hell out of it" know whereof they speak.  Their tireless querying efforts have been netting agents.  And so, shall I follow them into battle.  Excelsior!

Posted by Cynthia J. McGean at 9:28 AM No comments:

Elegy to the Typewriter

I started thinking about this post two years ago, when I heard that the last typewriter factory in the world had closed its doors.  I felt such a wave of grief over this news.  I still remember when my parents gave me my first typewriter, in third grade.  It represented to me their understanding that I loved to write, their belief in me as a writer, and their permission to make it official.  That typewriter stayed with me for over twenty years, before it developed so many personality quirks (truly a ghost in the machine) that I could no longer use it reliably for anything meant for public consumption.

I confess.  I don't use a typewriter anymore.  I haven't for years.  But I still felt so saddened and heartbroken at the notion that such machines had truly gone the way of the dinosaur.

As it turns out, the "last typewriter factory" story wasn't entirely accurate.  The rumors of its death have been exaggerated, though I doubt we can say the exaggeration was great.  Typewriters are still being made, but I wonder for how long.

We may love the idea of the typewriter more than the machine itself.  It represents a vigorous physical relationship between writer and creation.  Creating on a typewriter is not quiet and subdued, something you do at the beach or the coffee shop or in a secluded garden.  It's loud.  It hammers and bangs and dings and zips.  When the words flow, the typewriter announces it with rapid, staccato urgency.  And when the words slow, there is an ominous, suspenseful sound, footsteps stalking the hallway and pausing to listen at your door.  Mistakes are rocks over which you must stumble, realities you must face and deal with, requiring effort, and correcting tape or liquid paper, to remove.  This is a different animal than writing by hand or by computer.

Does this difference in the physical act impact a writer's style?  I wonder.  Are the works of the typewriter's heyday stylistically distinct from those created before and after?  You could make an argument that they are, that the peak of the typewriting era was also the emergence of rugged styles such as Hemingway, Heller, Salinger - the Americans riding in and driving out the more rococo prose of 19th century novelists.

Some writers (Harlan Ellison, for example) still swear by composition on the typewriter.  Is it a matter of age and generation?  Are there young writers today, under the age of 20, for example, who have even experienced writing by typewriter?  I imagine they are rare and that, like the quill pen, the pounding power of creation by typewriter is becoming an oddity, a curiosity, drifting into a past beyond retro and landing at last on the shores of antique, where it will not be lost but rather kept alive by a small but ever-present order of devotees who will share their love of this John Henry of a machine with anyone who cares to hear.
Posted by Cynthia J. McGean at 8:59 AM 1 comment: