I've been deeply immersed in stories and queries and school stuff, leaving me with nothing but scraps and incomplete drafts for blog posts.  Lucky for me, there are other awesome folks out there in the blogosphere with helpful thoughts on writing.  So, this week, I share with you a blog post on the pros and cons of writing routines, from K.M. Weiland at WordPlay.   How appropriate, given this current disruption in my blog-posting routines!

Writing routines have definitely amped up my own productivity as a writer, getting those creative muscles in shape.  However, the willingness to break routine has also helped, especially when I'm stuck or frustrated with one piece and can break routine to work on something completely different.

Check out Weiland's post and share your thoughts on the ups and downs of routines.
Posted by Cynthia J. McGean at 10:06 AM No comments:

Tomorrow (Sunday, May 20) at 2:00 on the Society of the Inner Ear at KZME Radio 107.1 FM, you can catch another one of my audio theater pieces.  It's entitled CAN YOU HEAR ME NOW? and was written as part of A MURDER OF CROWS, the award-winning Willamette Radio Workshop's first compilation of original pieces.  The MURDER OF CROWS project later morphed into the Writers On-the-air Workshop.  When Writers On-the-air drew out-of-state participants, our web-guru created an online forum that eventually evolved into THIS BLOG!  A selection of pieces from MURDER OF CROWS, including CAN YOU HEAR ME NOW? and SWEETHEARTS, an early piece by Hugo Award-winner and Nebula nominee  Mary Robinette Kowal, went on to win WRW's first Ogle Award.

CAN YOU HEAR ME NOW? was my personal take on horror in the age of cell-phones and the demons that possess them.  The concept has cropped up elsewhere since then, because it's a pretty irresistible step in the world of 21st century horror what-ifs.  Still, the piece has a special place in my heart, a sort of DILBERT-meets-POLTERGEIST.

The companion piece tomorrow is called STATE EXECUTIONER.  From the old LIGHTS OUT series, it's set in the days of King George III and tells the tale of a man who becomes obsessed with his profession as the state executioner.

Enjoy!
Posted by Cynthia J. McGean at 7:01 PM No comments:

Writing Through the Blues 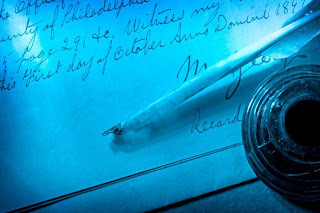 I was reminded yesterday of one reason I write and one way I know I'm a writer.  I started the day with a serious case of the blues.  More than the blues, really.  Something darker and more insidious.  I didn't want to do anything.  I felt oppressed by the sense of failure, in my writing among other things.  I sat down in the garden and started perusing my writing notebook and some old pieces.  Before I knew it, I'd been pulled into that all-consuming mental world of imagination, time had passed and so had my dark feelings.  It was so reassuring to remember writing had that power for me, and to realize that power held true even when my writing itself is in part the source of my depression.  It reinforced in me the knowledge that I will always write, whatever external validation or publication success may or may not happen.  I write because I write.
Posted by Cynthia J. McGean at 8:09 PM 2 comments:

What's In an Award? Thoughts on the Pulitzer Snub 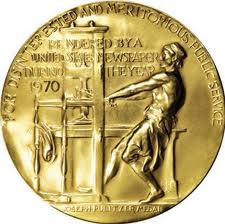 This year, no Pulitzer Prize was awarded for fiction.  Three novels were nominated.  Some say this snub is as it should be, that nothing good enough is out there right now.  Some say this is a reflection of the Pulitzer Committee's elitist attitude.  Some think it's a result of the increasingly commercial emphasis in the publishing world at the expense of true literary quality.  Some say the committee just nominated the wrong stuff.

I couldn't help balking at this snub.  With all the writing out there in this digital explosion of the written word, was there really nothing worthy of the recognition of the Pulitzer Prize?  At a time when bookstores are going under and the possible death of the printed book haunts the horizon, is this the statement the committee wants to make?  My first reaction was "What a slap in the face to every writer working today!"

But it turns out this isn't the first time the committee refused to award a prize.  And there have been some pretty great books published during the years that no prize was awarded.  In fact, we humans have a long tradition of failing to recognize great work that is ultimately vindicated by posterity.  Tolkien's LORD OF THE RINGS was passed up for the Nobel Prize because of supposedly "second rate storytelling."  CITIZEN KANE didn't win a best picture Oscar.  The lesson here is that external validation has its limitations, and what readers and posterity ultimately recognize as valuable may never receive the establishment's stamp of approval.

So, write your story.  Then go ahead and throw your hat in the ring for whatever external validations are out there, but know they never tell the whole story.
Posted by Cynthia J. McGean at 8:54 PM 4 comments: