Lessons from a Seed 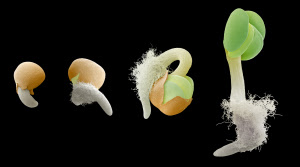 Seeds have two states that give them added survival strength when conditions aren't right for growth.  When seeds are in the packet and haven't been planted, they're dry and inactive.  They're not growing, but they aren't vulnerable either.  They can handle severe environmental changes.  When seeds are dormant, they're alive and they've been planted, but they're not growing.  They're waiting.  In dormancy, usually, something about their conditions has to change to get things moving again - temperature, water, sunlight, soil.  Dormancy is a way of surviving by making sure seeds don't put energy into growth until ALL the conditions are right.

Then there's germination.  The seed has been planted.  The conditions are right.  But you can't see anything happening.  That's because germination is the growth of an embryonic plant inside the seed.  You don't know it's happening until the sprout finally breaks through and emerges.

If you never give the inactive seed what it needs, it will stay inactive, and may eventually die.  If you plant the seed, but conditions aren't right, it may lie dormant until the right conditions come along.  If it's dormant for too long, you can bump it out of dormancy by changing the conditions.  And if the seed is germinating, it's in a vulnerable period and needs the right nutrients and conditions maintained while it does its work.

Lessons for the writer who is blocked or stuck?  First, you have to figure out WHY you're not writing.  Which state are you in, if you apply the seed metaphor?  Are you inactive, giving yourself the toughest possible protection against harsh external conditions (maybe massive life stressors, for example)?  Are you in a dormant period, where many conditions are right but things just aren't moving forward?  Which conditions aren't right?  What crucial element is missing that is causing you to conserve your energy?  Or are you germinating, taking in nutrients and developing the embryo of an idea through mental work that just cannot be seen yet?

How you proceed next depends on which kind of blocked you are.

Me?  I have a project that's well beyond the embryo stage, and I even have a plan for how to work on it.  But the timing doesn't feel right.  Every time I sat down to work on it, something held me back.  That project is in a dormant phase.  Some of the elements it needs are in place, but the conditions aren't quite right.  If it lies dormant for too long, I will need to kick start it by experimenting with which conditions have to change.  For now, I'm content to let it lie dormant, rather than expending energy at the wrong time.

Instead of working on that project, I pored over old notebooks and picked out a couple of ideas that spoke to me.  I find myself wanting to read, read, read - taking in nutrients.  The more I read the more I feel that creative urge pushing up inside of me, looking for an outlet.  Definitely germination.  It's a delicate phase.  I need to be patient, continuing to take in nutrients and sustain the favorable conditions that are feeding me.

I realize I've extended this metaphor well beyond the bounds of decency.  It's helped me.  I hope it's helped you.  Anyone else out there feeling blocked?  Which seed state is it - inactive, dormant or germinating?