Voices In Your Head: Are Writers Crazy?

I've been working with my third and fourth graders on using periods correctly in connected text.  "Listen to the voice in your head," I said one day.  "If it stops, then you probably need a period."  Not a rule, but a good guideline when the trickier nuances of grammar elude you.  So, I'm teaching children to listen to the voices inside their heads.

Isn't that what we writers do all the time?  Listen to the voices in our heads, follow the craziest, darkest impulses and hallucinations, enter waking dreams, talk to ourselves, project alter egos and multiple personalities that take on lives of their own and tell us what to do.  And we can't seem to stop.  It's pathological.

Some people even believe that you can't be a truly gifted writer, or gifted in any creative field, unless you're mentally ill.  They point to the long, long list of creative geniuses who struggled with mental illness, and, in so many cases, succumbed and committed suicide.  "If they'd had access to prozac, maybe they never would have created such great works."

People don't seem to apply quite the same argument to brilliant scientists.  And I can't think of many examples of great scientists who killed themselves.  Why?  Is the scientific mind less vulnerable to the destructive influence of creativity?  Or is scientific genius simply not viewed with the same mistrust as artistic genius?  Maybe I'm just less aware of the struggles great scientists have had with mental illness.  Perhaps the stigma is greater for a scientist who is insane because their mental illness could discredit their work, while the world may still embrace the works of an artist who is insane.

My husband and I watched the German silent film of FAUST last night.  I was struck by the similarities between Faust and Shakespeare's Prospero.  Magicians, working strange wonders with their mystical books.  Early alchemists blurred the lines between science and the mystical imagination all the time.  And people feared them, saw them as dabblers in dark magic making deals with the devil, or madmen attempting to play God, as in FRANKENSTEIN and so many similar tales (written by us creative types).

Or maybe these are just the delusional ramblings of a madwoman.
Posted by Cynthia J. McGean at 8:41 PM No comments:

Email ThisBlogThis!Share to TwitterShare to FacebookShare to Pinterest
Labels: creativity and mental illness

The Writer's Role in Social Change 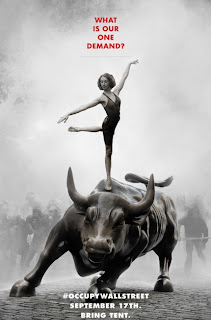 Tonight, one minute after midnight, the city of Portland plans to evict Portland's component of the Occupy Wall Street Movement, Occupy Portland.  I don't know if this will happen peacefully or with violence.  Two sides of the 99% - the Portland Police and the protesters - may well end up pitted against one another.

Thinking about this impending event and what it means has lead me to think about the writer's role in social change movements.  We have a duty to bear witness, to ask difficult questions, to generate conversation, perhaps even controversy.  Sometimes, we come down on one side, sometimes another, but often the writer's role is to explore the complicated world of the in-between.

John Steinbeck's GRAPES OF WRATH is a powerful example of the writer bearing witness in an era of social change.  Charlotte Perkins Gilman, with her work THE YELLOW WALLPAPER, gave voice to the earliest frustrations of feminism on the most intimate, personal level.  On the nonfiction side, I think of Howard Zinn's radical, perspective-altering PEOPLE'S HISTORY OF THE UNITED STATES.  Emile Zola, too, comes to mind.  Virginia Woolf's essay A ROOM OF ONE'S OWN is a stirring call to every woman to fight unceasingly for change.  One could argue that almost any writing has the potential to be a voice of change.  At a minimum, we have a duty to examine whether we are playing that role.


Perhaps the role of the writer in social change is clearest for writers of nonfiction - journalists, for example, or essayists.  For fiction writers, it may be more complicated.  Sometimes, the writer's position ends up being unpopular with both sides of the issue, because it is our duty to explore both sides.  The worst of social change literature is that which caricatures one side and therefore fails to speak to anyone but those who already embrace the author's viewpoint.  The best of social change literature casts light upon the dark corners and spurs action or powerful discussion.

In 1935, writer Archibald Macleish wrote a verse drama about the stock market crash entitled PANIC.  It features a chorus of the unemployed, and a group of bankers, and includes a scene in which angry radicals storm the board room of the bankers.  It gives heartfelt, beautiful poetic voice to the pain of the average person during an economic crisis.  It expresses the revolutionary anger such a crisis can engender.  And it commits the crime of humanizing even the bankers.  It ends with the declaration "Man's fate is a drum!"  It took me a while to understand this sentence, which seemed to be the culmination of the entire piece.  A drum must be beaten to make noise.  It requires a human hand and human action.  Macleish's simple statement is a call to action, but the action is left up to us.  Does any of this decades-old piece sound familiar?

In the wake of whatever happens tonight at Occupy Portland, and whatever happens in the other Occupy sites throughout the country as evictions loom, we writers must ask ourselves, what is our role?  How do we bear witness, spark action, generate discussion?


Postscript on November 19, 2011:  For an insightful and informative up-close perspective on Occupy Portland, check out David Loftus' series of blogposts at http://www.americancurrents.com/2011/11/occupy-portland-part-7-aftermath-and.html

You Can't Win If You Don't Play

When it comes to all the schmoozing and self-promotion aspects of writing, I'm a big wimp and colossal whiner.  But at least I've learned one cardinal rule since I became a grown-up.  You can't get published if you don't put yourself out there.  Overnight success is more myth than reality.  It certainly isn't the norm.  And if you're like me and you hate self-promotion, the whole process of building a digital platform can be enough to send you into the fetal position.  So, what do you do?

Okay, there's no way to avoid self-promotion.  But there is a different way to come at it.  My critique group today pointed out that digital presence is more than just blog stats.  (Yes, my grasp on this stuff really is that simplistic).  It's all the many ways that you register on the radar, all the little blips, that can pave the way for the time when you push for something bigger.

Write stuff and submit it, over and over.  Doesn't have to be novels.  Make it whatever you can manage.  Because you can't win if you don't play the game, and you can't get published if you don't stick your neck out and submit your writing.

Obvious advice, right?  But I remember a time when the thought of showing ANYONE my writing was beyond terrifying.  Over time, I've sent in a script here, a short story there, a novel that wasn't ready yet, an article, an audio theater piece, a picture book.  These days, while I'm plugging away at the exhausting and protracted process of revising the novels, I'm submitting short stories.  It gets a little less terrifying and a little more run-of-the-mill with each step.  And then I keep writing so I don't obsess over the waiting game.  I try not to let too much time go by without something being out there in the universe.  Sometimes I succeed and sometimes I slip.  It's one step at a time.

Posted by Cynthia J. McGean at 8:28 PM No comments: