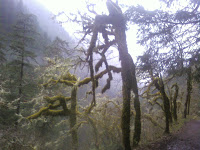 Sometimes, as I'm reading, I just have to stop and say, "Damn, that's good!"  This is one of those moments.  From ANNA KARENINA, by Leo Tolstoy, currently on my iPad Kindle:

When Levin, after loading his gun, moved on, the sun had fully risen, though unseen behind the storm-clouds.  The moon had lost all of its luster, and was like a white cloud in the sky.  Not a single star could be seen.  The sedge, silvery with dew before, now shone like gold.  The stagnant pools were all like amber.  The blue of the grass had changed to yellow-green.  The marsh birds twittered and swarmed about the brook and upon the bushes that glittered with dew and cast long shadows.  A hawk woke up and settled on a haycock, turning its head from side to side and looking discontentedly at the marsh.  Crows were flying about the field, and a bare-legged boy was driving the horses to an old man, who got up from under his long coat and was combing his hair.  The smoke from the gun was white as milk over the green of the grass.


Okay.  There are a couple of similes in there that, perhaps, are cliche today.  Who knows if they were then, or if they are in Russian?  Not me.  And maybe there are too many similes for some people's tastes, though you never know what's been lost in the translation.  But, damn it, if you don't feel like you are there with Levin, hunting the rural Russian marshes in the chilly dawn, you have no soul.  Talk about painting with words in the minutest detail, attention to every brushstroke that can bring the scene alive.  And the structure!  The way it starts with humanity and ends with humanity, while the slow, must-be-savored imagery of the solitary moment blossoms out in-between?  You can't help but read this section with the quiet, reflective, hushed reverence that Levin is experiencing.  Damn, that's good.