Breaking Up the Logjam of Mid-story Writer's Block 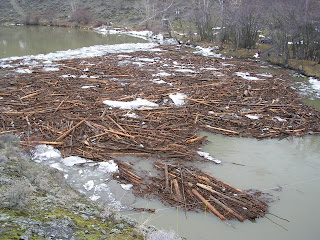 In the old days, breaking up a logjam was incredibly tricky and dangerous. Loggers carefully removed one or more “key logs” (a little like reverse jenga, I guess) and if it was a really bad jam, they had to use dynamite. These days, they use a machine to haul out big chunks until the logs start moving.

I've been working on revisions for my YA novel, THE SPARROW'S SECRET HEART. It was my first novel, and it's been through more rewrites than I can count, including a complete point of view shift from third person to first person, but I keep coming back to it because I still love the protagonist and he just won't let me give up on him.

Recently I hit a logjam. I'm trying to rewrite a pivotal scene that introduces an important character, the protagonist's Aunt Megan, a complete stranger to him until this moment. My critique group demanded a better description of Aunt Megan and her house, as well as a restructuring of the scene to raise the tension and conflict. I kept coming at the scene and stalling. Over and over and over. Finally, I realized I really didn't know enough about this aunt of his. So I sat down and started working on the backstory.

Now, I'd worked out a backstory for Aunt Megan before, but it really was surface stuff, more about plot logistics as they affected my protagonist than about Aunt Megan herself. I realized I didn't even have a clue how to get inside her head yet. So I started with the timeline, her age when certain key events took place. I pieced together the ways those events affected her and her life. Then I wrote my problem scene in first person from Aunt Megan's point of view. Mind you, I have no plans to rewrite the novel in her point of view. This was an exercise to help me find my way into the scene.

I wish I could say the words flew from my finger tips, but they didn't. With each key log I thought I'd removed, new ones took its place, new questions about who Aunt Megan was. I wrote scenes that had nothing to do with my protagonist. I followed lines of thought well beyond the necessary conclusion. I got out my sketchpad and drew a complete floor plan of her house. It was a little terrifying to make such a commitment to the interior world of a character who isn't my protagonist. Why was I spending all this time on stuff that wouldn't even make it into my final draft?

But it was worth it. Bit by bit, the logs began to break free. Aunt Megan came into focus. Critical motives and subtexts revealed themselves. It's taken me a good week or so, and a lot of words that won't end up in the novel itself, but the logs are floating downriver again.

Mine was definitely a case of removing key logs one at a time, gradual and painstaking. But I've also had those dynamite situations - just sit down and power through it with some insane, off-the-wall notion. I've even used the chunks at a time method - cut this chunk, move this chunk, and soon it makes sense again.

When you've faced writer's block, how did you break up your logjam? Chunk-chomping machine? Key logs? Or dynamite?
Posted by Cynthia J. McGean at 10:55 AM